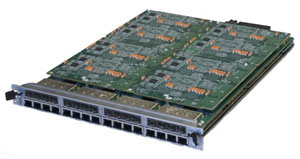 The goal of the test was to verify the scalability and stability of the XMV16 module's control plane. The module's scalability was validated in what Isocore calls a "testing the tester" environment, in which a major manufacturer's carrier-class router was used as a device under test (DUT). Isocore conducted a multiprotocol scenario where four routing protocols — OSPFv2, OSPFv3, BGP, and BGP4+ — were enabled on a single test port. Isocore performed the test using its unique carrier multiservice, single-port scaling, benchmarking methodology. Ixia's XMV16 LAN Services Module operated in its Optixia XM2 field-proven, multiservice test chassis.

"It is quite challenging to create an environment for testing test equipment with a DUT that can scale to the tester's capabilities," said Dr. Bijan Jabbari, president of Isocore. "The observed results demonstrate that Ixia's XMV16 LAN Services Module does indeed support multiple protocols in a highly scalable environment."

Isocore reported that this was a unique test where routing protocols for both IPv4 and IPv6 were scaled in the same setup and as needed. As IPv6 grows, dual-stack test environments are becoming increasingly important.

"The Isocore test results validate the scalability and stability of Ixia's XMV16 modules," said Victor Alston, senior vice president of Product Development for Ixia. "This test proves that the XMV16 modules are more than capable of validating the performance of carrier-class, multiservice switches and routers for network equipment manufacturers and service providers."

To view the Isocore summary report for the Ixia Gigabit Ethernet LSM1000XMV16 GigE LAN Services Module (XMV16) Scalability Verification go to http://www.isocore.com/reports/ITD-12099-IsocoreIxiaXMVScalabilityTest Report1.6.pdf. (Due to its length, this URL may need to be copied/pasted into your Internet browser's address field. Remove the extra space if one exists.)